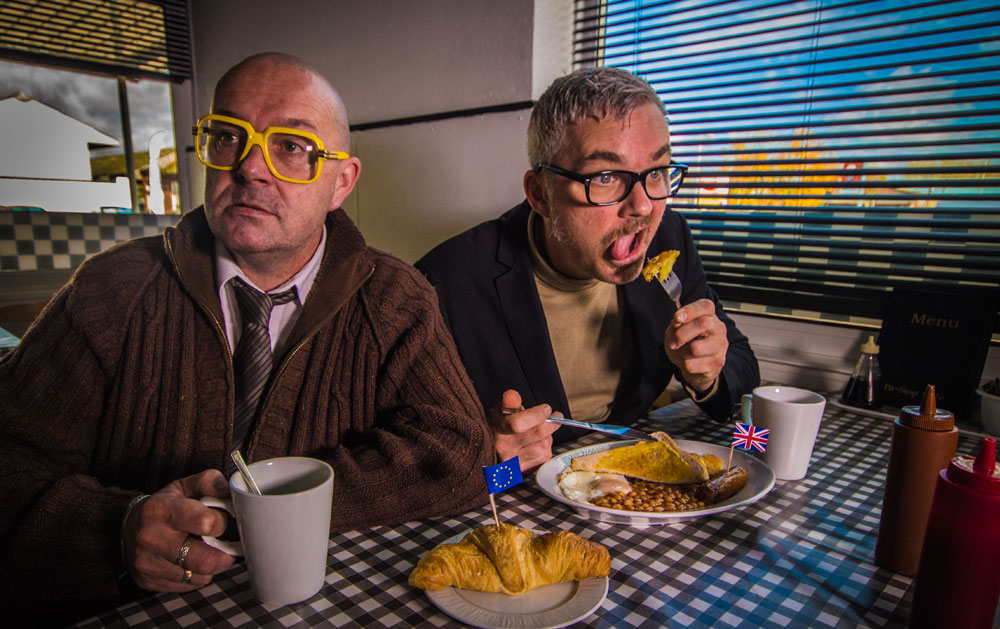 It’s Friday night and I am in Exeter’s Cygnet Theatre watching the Brexit Club; as the play reaches its climax four men are locked in a heated debate – only the show has been performed by just two impressive actors.

The geeky character of Melvin (Midge Mullin) airs his views, then in an instant the meaty Don Beattie (also Midge Mullin) wades into the debate. Next brummy Len Silver (Nathan Simpson) adds his tuppence worth, shortly to be interrupted by Sid Vishnu (also Nathan Simpson).

It is the ability to instantly (and seamlessly) swap between characters that makes these two actors outstanding.

This is a light-hearted look at the Brexit debate told through stereotypes and the well-rehearsed arguments we’ve all heard before – Brexit is about bendy bananas, immigration and the NHS… right? If you’re are looking for hard-hitting political satire that might make you consider a different angle on this debate then perhaps this show isn’t for you. But if you want an enjoyable evening out watching a theatre company that, in my opinion, make a huge contribution to the City arts scene then you won’t be disappointed.

The chemistry of Mullin and Simpson on stage is wonderful to watch; their pinpoint timing, and their ability to conjure up a room full of characters with virtually no props or costume changes is fabulous.

The Brexit club begins on 23rd June 2016 – the day of the European Referendum. It is clear that beneath the lunchtime chit-chat and jovial banter at Pollards Pickles there is trouble brewing. Sid Vishnu’s lentil Dahl and Don Beattie’s bangers and mash are emblems of a nation divided – but which way will they vote?

As the story unfolds family bonds and friendships are polarised by politics, but in the cold light of the referendum hangover questions are still being asked. Will lunchtimes at Pollards Pickles ever be the same again? Is Brexit really the best thing?

Did cousins Len and Melvyn bridge the great divide? Or were they left lamenting their own Brexit votes? Catch the show to find out….